November 1st 2018 – October again proved to be a very busy month in the world of the Google Home Devices and the Google Assistant.  Google announced a bunch of new things at their event in early October, including a brand new device for the Google Home family, the Google Home Hub.

One of the most surprising announcements to come out of the event was regarding the Pixel 3.  The pixel 3 phone will let users send phone calls to the Google Assistant, using Google’ Duplex technology. This is the same tech that will let the assistant book appointments on your behalf over the phone with restaurants, hair salons, etc.

With the Pixel 3, users can send calls to the assistant who will screen them for users in real time.  Users can watch the transcription of the conversation on their phone’s lock screen.  The lock screen will also have options for what the Google Assistant will say next to the person on the other end of the line.

This is a fantastic feature if you get a lot of random political calls or calls from telemarketers.  You’ll never had to hear them again with this feature, just let the Google Assistant endure the misery of talking to these people instead.

It’s unclear if this feature will be broadened out to other Google Assistant devices in the future. 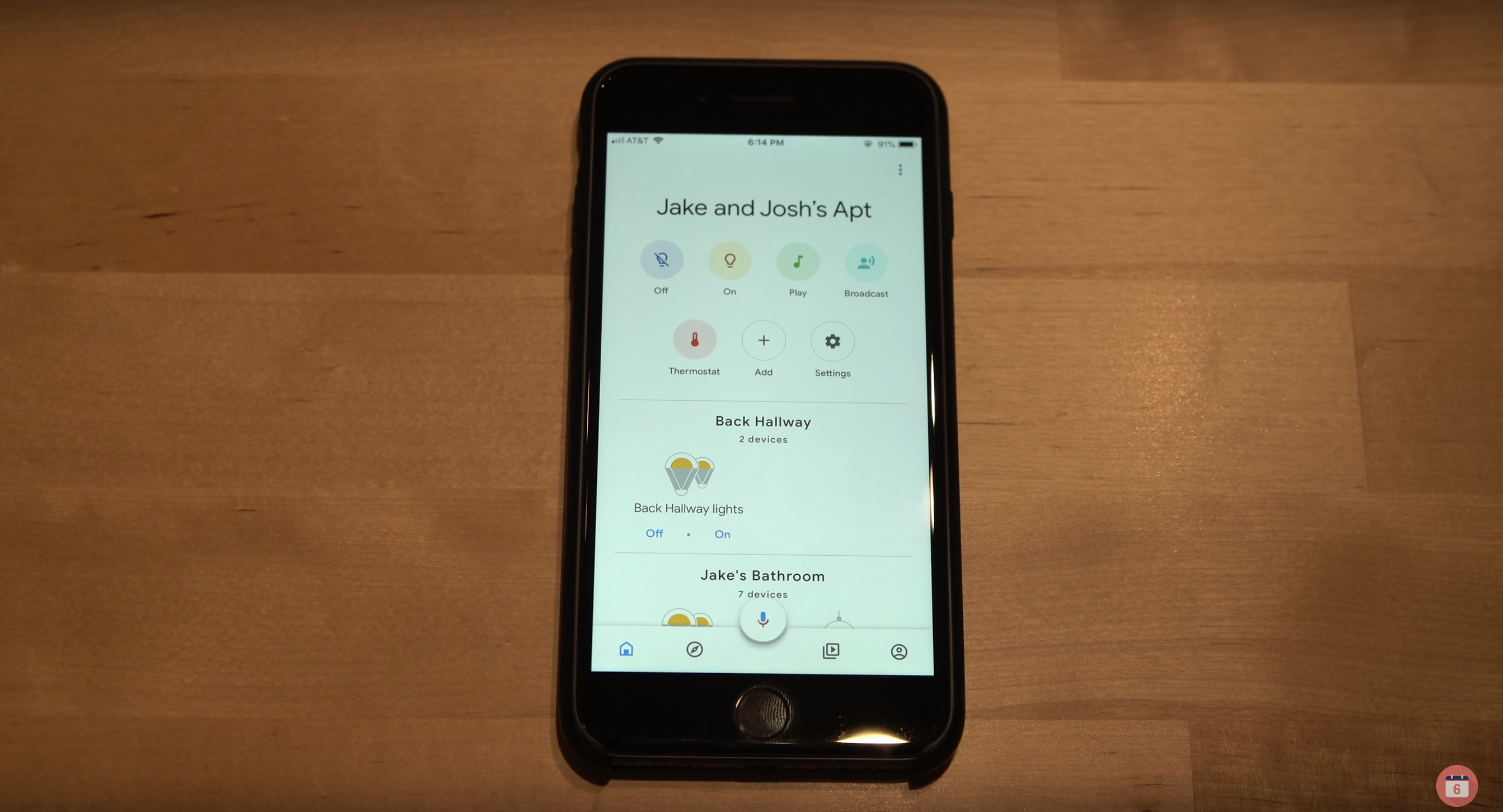 One of the largest features Google has rolled out in conjunction with the Home Hub is the new smart control interface that accompanied the redesign of the Google Home app on your phone.  Google has completely revamped how you interact with your smart home appliances thanks to this new design while implementing one huge new feature: multiple homes.

With Multiple Homes, you can be the member of multiple smart households.  This is really handy especially if you’ve bought your parents smart devices and have previously had them logged into your Google account under the same household.  Now, you can split out devices and create multiple homes.  Now you’re parents won’t accidentally turn off your lights when talking to devices linked to your accounts.

Google didn’t just stop there with their smart home control redesign.  You now have a button that turns on and off everything in your household.  They’ve also included a new button and controls for your thermostat at the top as well.  You can adjust it from the screen and even change the mode of the thermostat.

Further on down in the new smart home interface you get a breakout of all your devices in each room.  Google makes it easy to be able to adjust lights, turn them different colors, stream music to your speakers or speaker groups, all right from the convenance of this new home design.

One of the more interesting applications of this design is not actually with the home app, but with the smart displays.  Google has basically created a category of devices that serve as the central interface for controlling your home’s smart appliances now.  A device that is always on, in the same place and able to control everything in your home.  There have been speciality devices for more affluent people that have done this previously, but nothing on the scale of what Google is now doing with it’s smart displays. 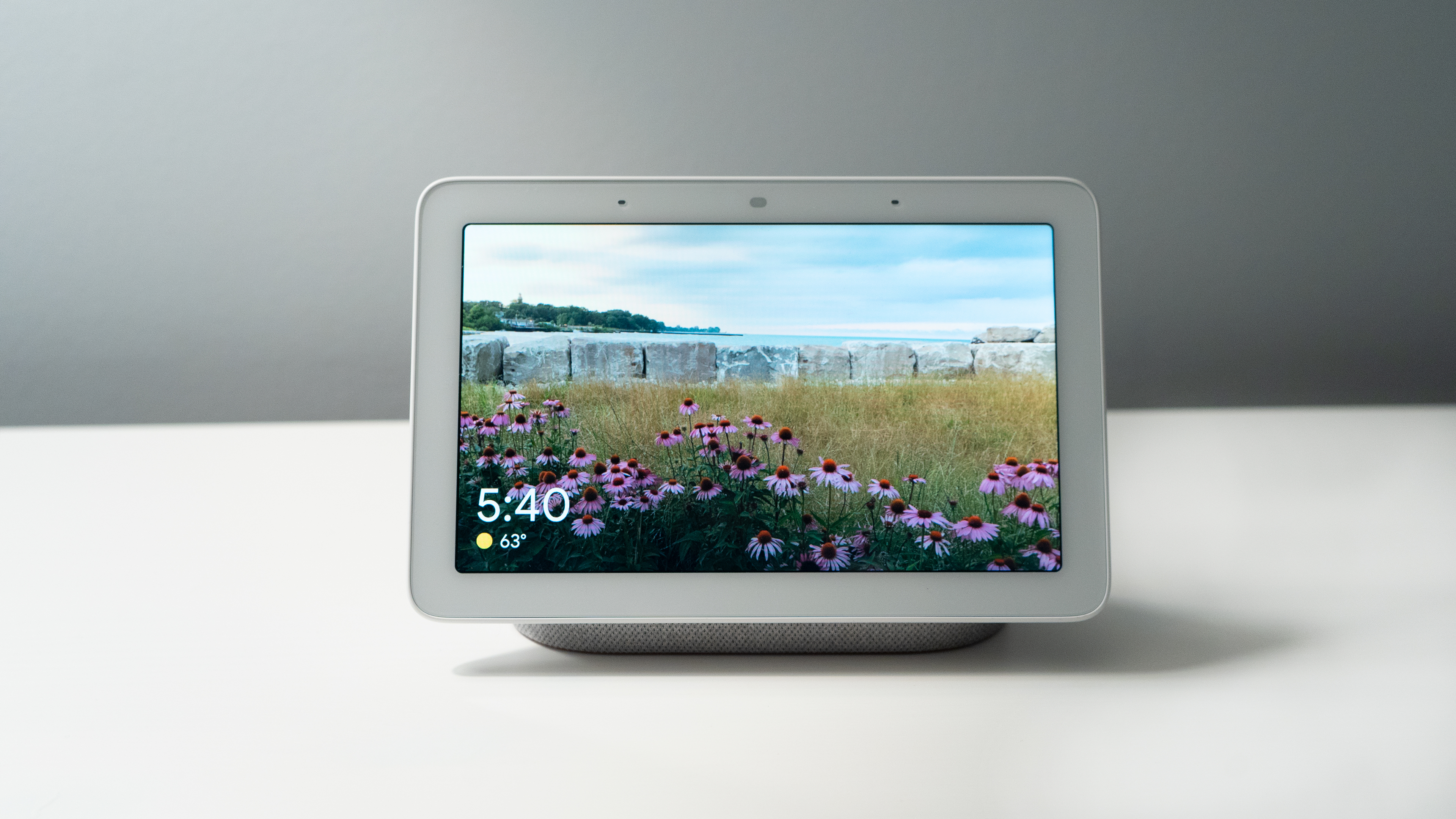 Ok, now onto the other topic from the event that has a pretty large impact on the Google Home ecosystem and that’s the Google Home Hub.  This cute little smart display retails for $150 and isn’t actually the first Google Assistant Smart Display to come out, but it is the first one that has been designed by Google.

One of the largest differences between the Home Hub and it’s peers is it’s size. It’s much smaller with it’s 7″ diagonal screen.  But don’t let that size fool you, the screen is insanely good. Google has built ambient light and color temperature sensors into the device.  The sensors and software make photos the appear on the display look like they would if they were printed out on matte photo paper, no matter the surrounding lighting color or brightness. 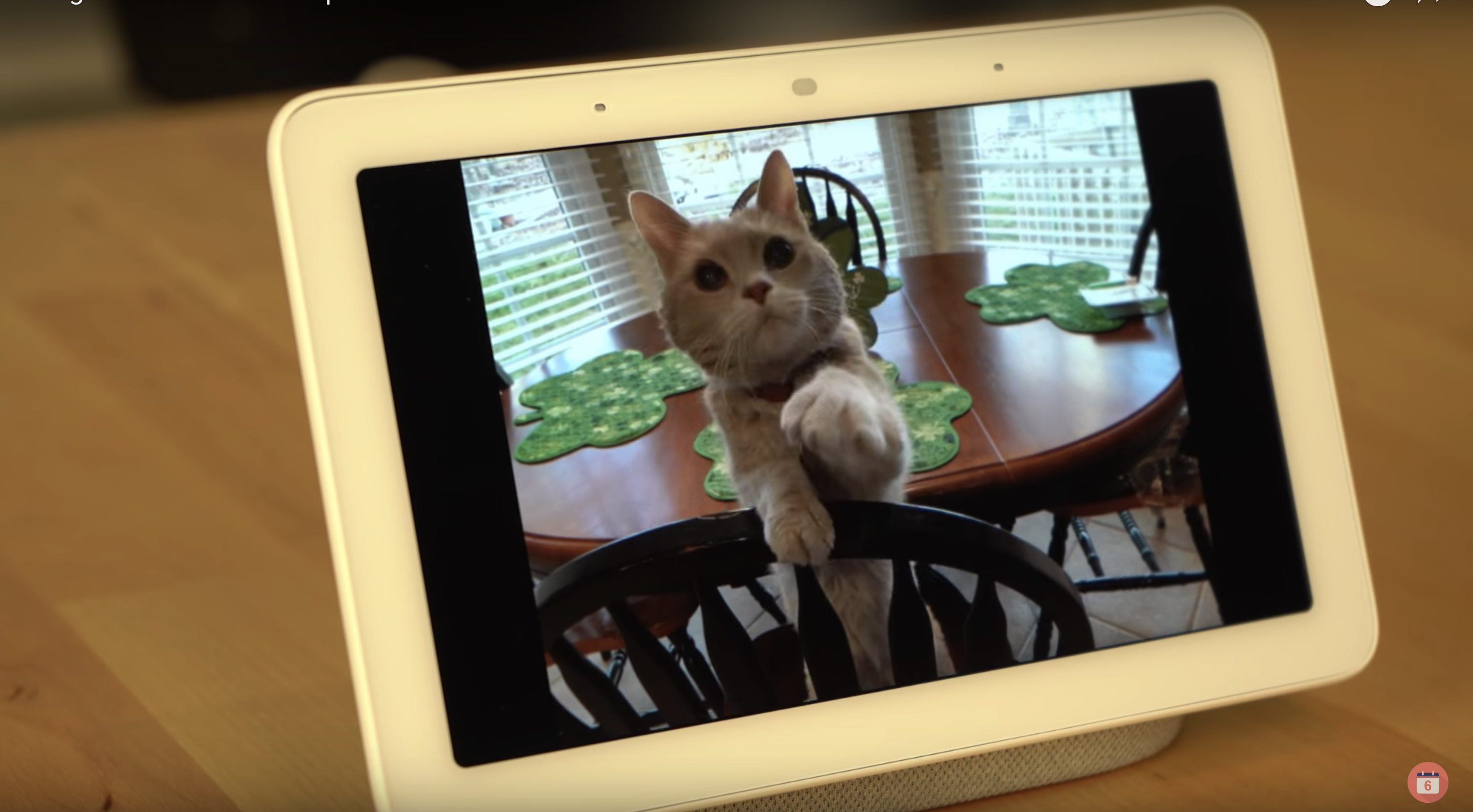 What you’ll see on the Google Home Hub most of the time are photos.  This occurs when the device is in Ambient mode.  Ambient mode allows you to display a variety of things on your screen including photos, art gallery, a fullscreen clock or experimental.  The most popular one people are going to choose though will be photos.

The photos you can display are being pulled from Google photos, and you have a few options on what photos can be displayed.  You can choose your favorites, certain albums, recent highlights or you can select family and friends you want to see photos of.  When new photos are taken of these family and friends and uploaded to Google photos, they’ll automatically update on the smart display.

And don’t worry, Google will also try and not put bad or blurry photos into the slideshow on the display automatically. 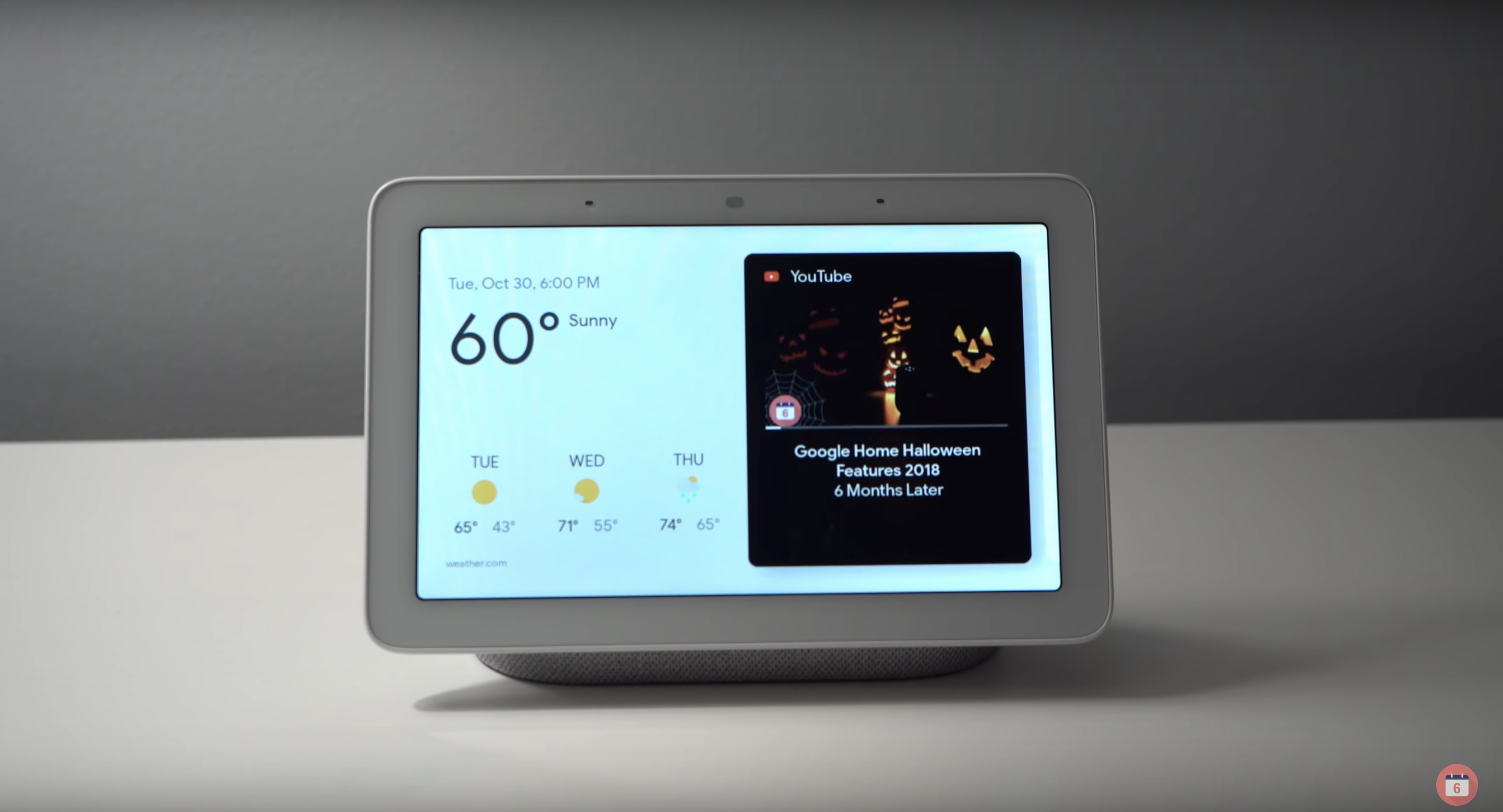 The Google Smart Display software has a pretty simple user interface.  To get back to a previous screen you slide your finger from the left edge of the screen to the right. Swipe up from the bottom to see  volume and brightness settings.  You can swipe down from the top to access your smart home controls.  If you’re in the Ambient mode and want to see the main display window, just tap the screen.

Obviously Google’s smart displays come with the Google Assistant, similar to how Alexa comes on the Echo Show.  However, Google’s attention to detail with their visual smart display design really stands out.  Here are a few examples:

• When you ask Google a question on the smart display, it’ll show you the text of what the assistant heard, so you can see if it missed part of your query.

• When asking Google what the weather will be for the week, if there is rain in the forecast, you’ll actually hear rain or a thunderstorm sound.

• When telling Google to “repeat after me” it’ll display a little parrot icon, which is just adorable.

Recipes with the Smart Displays

Another incredibly useful of these smart displays is recipes.  Before, Google could guide you through a recipe over a speaker, but being able to actually see the steps and have the Google Assistant guide you through them takes this experience to another level.

Plus, they’ve expanded their integrations and recipes available so you have a lot more recipes to choose from:

“Hey Google, show me a recipe for canneles” 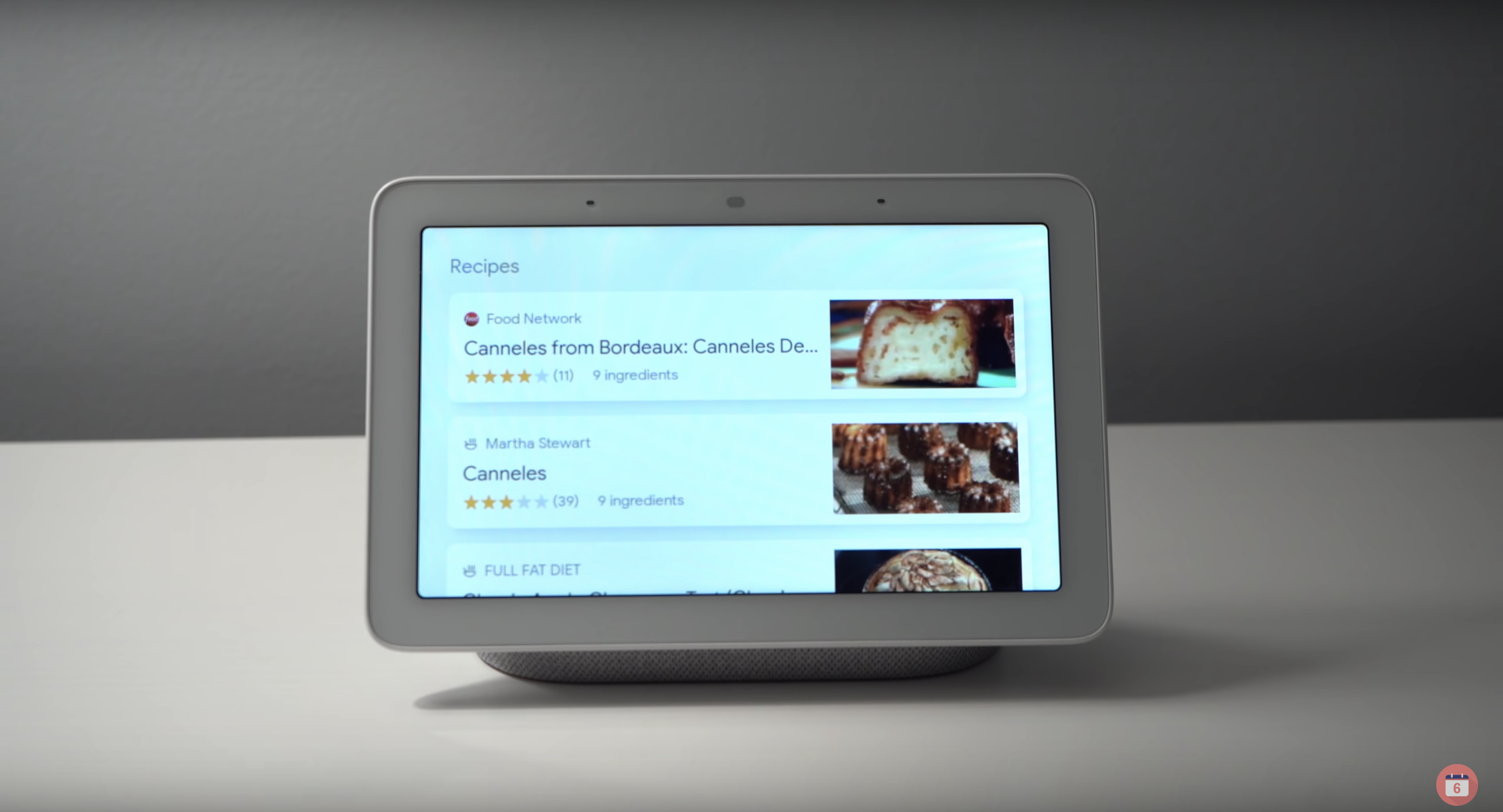 But let’s say you need even more help with the cooking technique for a particular recipe.  Well, luckily Google Smart Display’s have YouTube built into them so just ask google for videos on YouTube for the thing your trying to make.

Another key feature that Google has in their smart displays that I thought was pretty neat was their integration with Google News.  Previously in the last features update with the Google Home speakers, I talked about how you could ask your Google Home about a specific news item and it would read current news stories to you.

Well, with the Google Smart displays, Google has gone a step further, parsing out videos from your Google News feed that it can then display.  This even works when you ask your Google Home Hub about a specific news topic, it’ll show you videos of that new topic that you can select from. 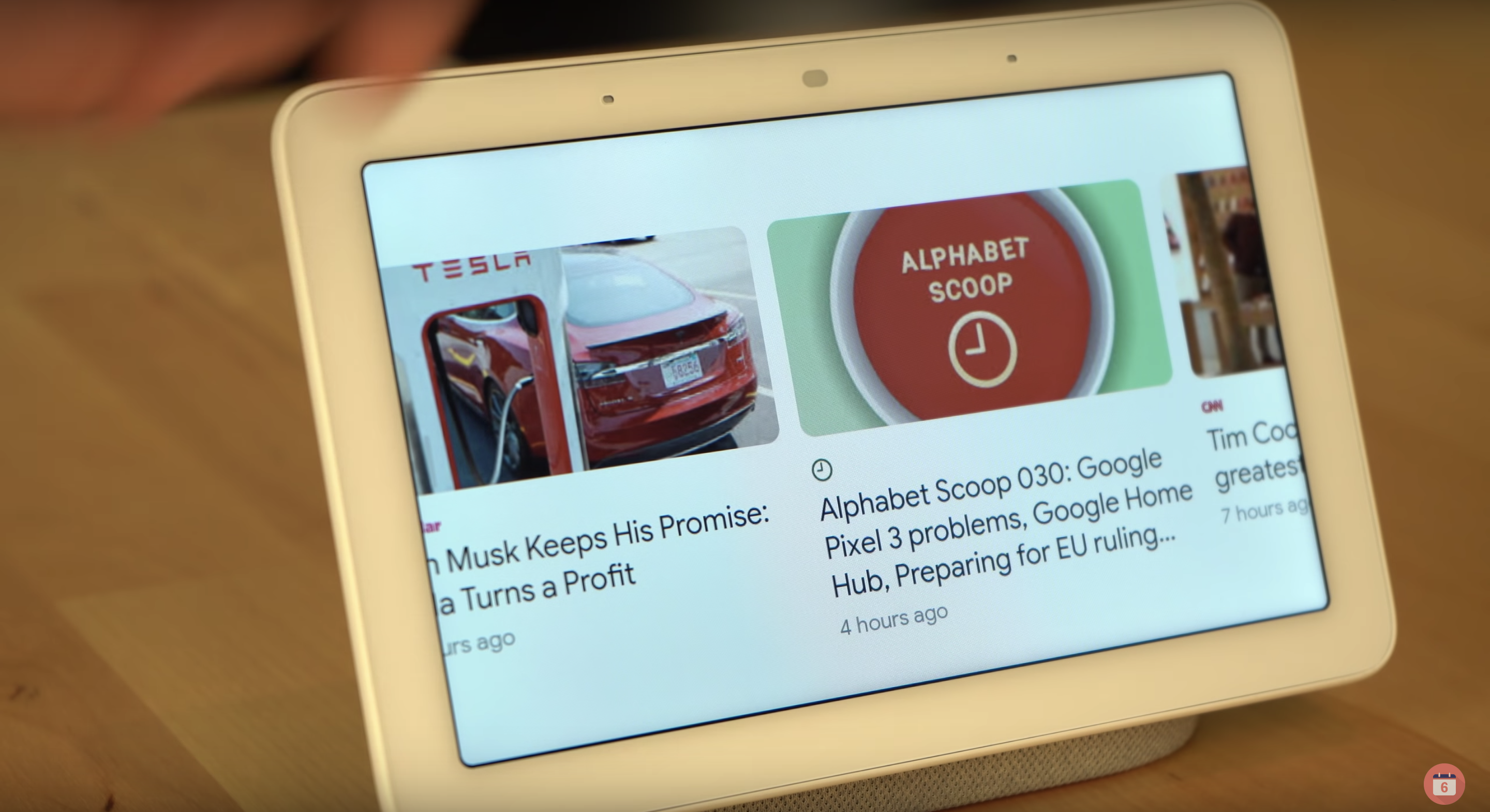 I think the Google Home Hub in particular is a quite compelling device.  With it’s gorgeous display, price point and size, I think this device will be quite versatile in where people place them in their homes. On a very simple level, every interaction I have with the device is a positive one.  Seeing all of these great pictures I’ve taken over the years fade in on the display just makes me smile. Any product that can create a positive interaction like that is definitely one to watch out for.