Google is Killing Inbox by Gmail

October 8th 2018 – A few days ago, Google announced to the world it was going to kill Inbox by Gmail, another one of it’s beloved products by it’s passionate Google fan base.  It will be sunset in March 2019, making it the latest entry in the Google Graveyard (we had some fun with this graphic). 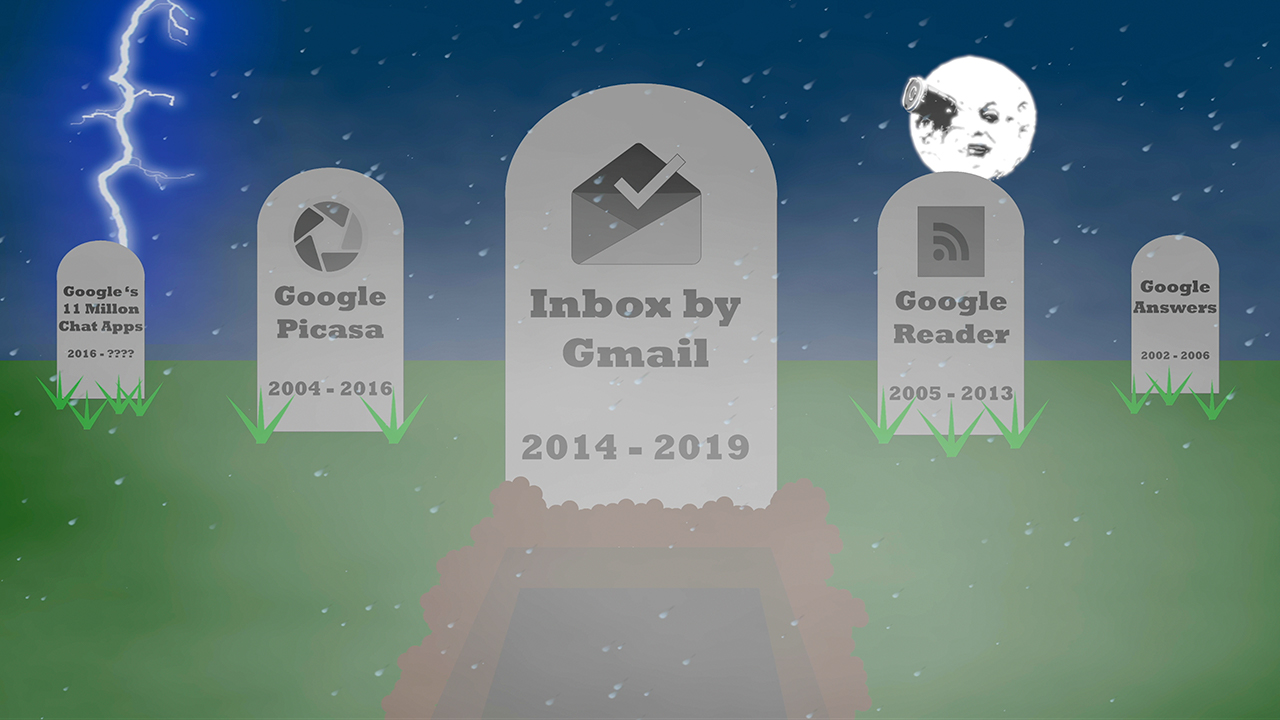 Inbox by Gmail was introduced to the world in 2014 as Google’s new experimental inbox.  It was an entirely new way to experience your email inbox if you were a gmail user. Inbox simplifies the email experience. At it’s core, it’s goal is to get users to spend less time on email.

The Inbox UI is simple, clean and refreshing looking.  You have you different bundles, email lists, and main features on the left of the display. In the middle, you have all of your emails.  Looking at the same inbox on Gmail vs. Inbox, there is a lot of less emails to look at in Inbox thanks to bundling.  Bundling is a feature where your emails are bundled into groups like purchases, trips, or the best one: promotions.  They make your inbox less cluttered overall. 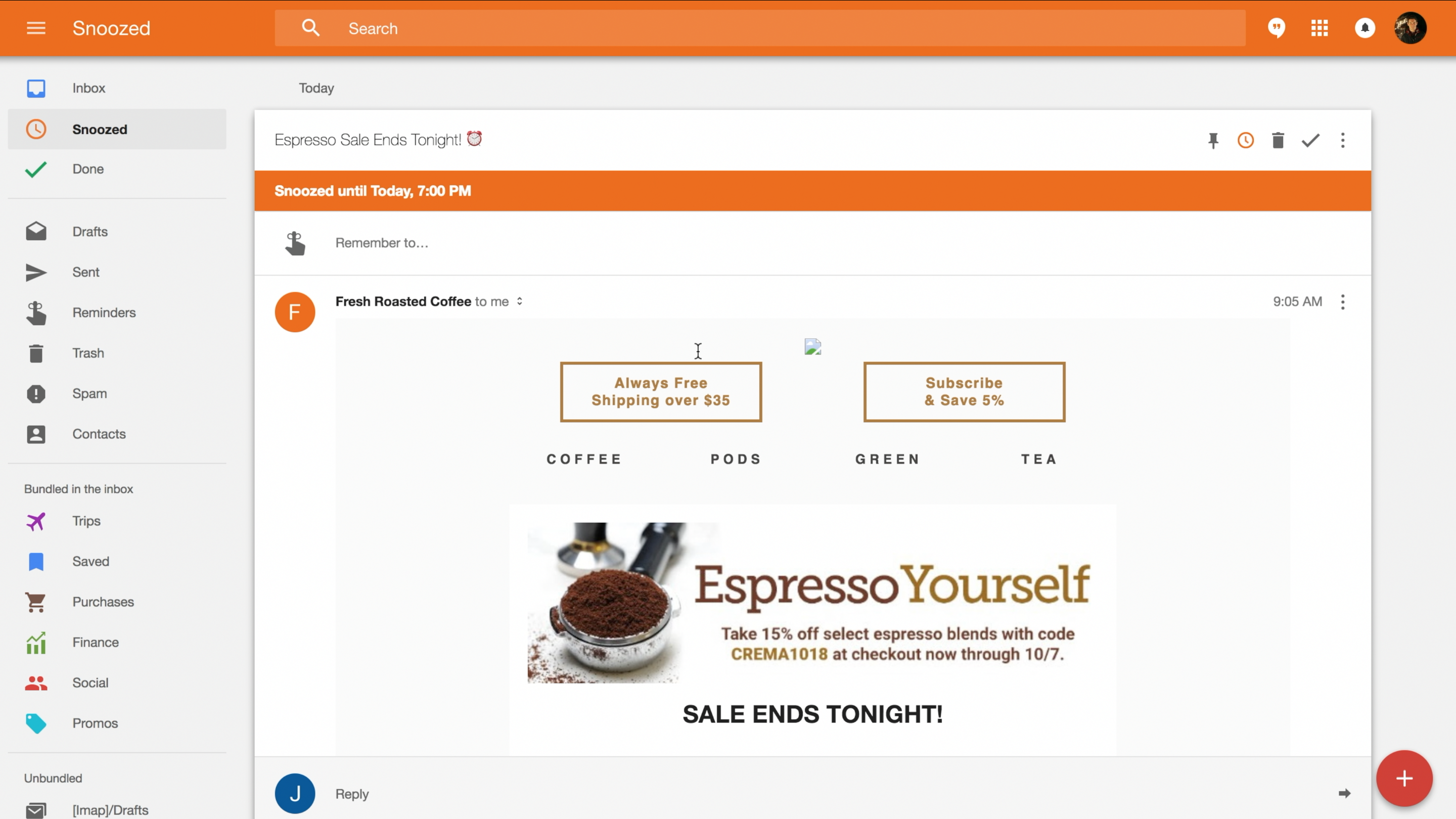 Snooze allows you to send an unread email or group of emails out of your inbox and you can have them re-appear at a later time.  On the phone app, you can easily do this by swiping left on the message.  In the iOS Gmail app unfortunately, there’s no easy gesture that does it.  In the Andriod Gmail app, you can enable the swipe to snooze feature.  For iOS users, you have to go into the message and then click the three dots and hit snooze.

I use the snooze feature a lot, especially for bills that come into my inbox.  I’ll snooze those emails so they come back up into my Inbox closer to when they are due. 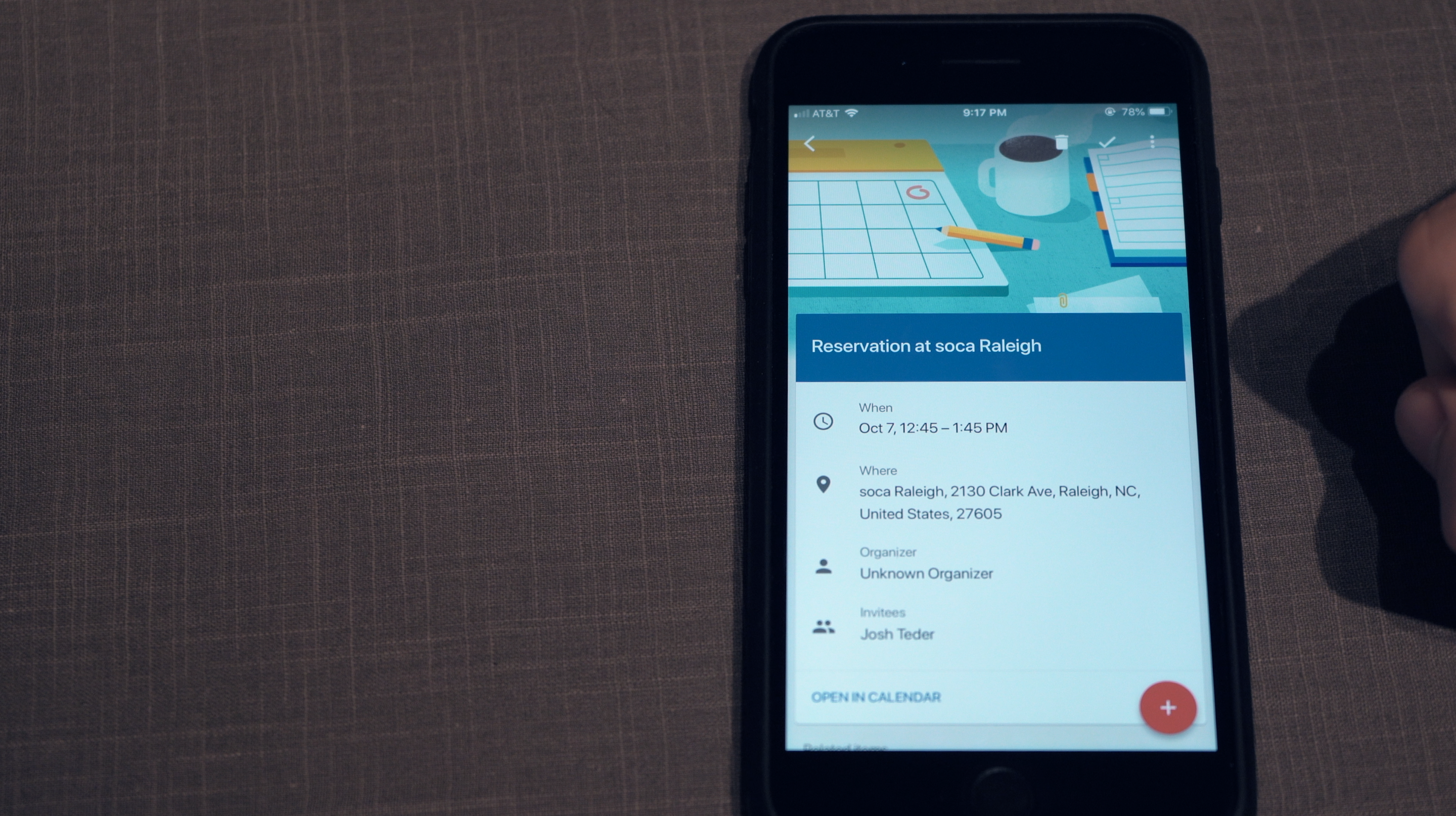 Looking at how Inbox organizes your emails into bundles and the snooze functionality, you can start to see how fundamentally different it is from a normal email inbox.  I treat my inbox more like a task list.  I keep the emails in my inbox that I haven’t read or need to follow up with an action item on.  Once I’ve completed an action, I mark the email done. On the phone app, this is even easier since you can just swipe the message away to the left.

Marking something done in Inbox is basically the same thing as archiving the message in Gmail, though I like the terminology much better in Inbox.  I feel more hesitant about sending something to an archive than just saying I’m done with it.

If you need to add something to your inbox, and if you’re like me and treating it like a task list, you can easily hit the plus button and add a reminder to your Inbox.  Reminders setup from your Google Home devices or by the Google Assistant on your mobile phone will also appear in .

This task list approach is especially handy at work, where i use Inbox every day.  Ever reach out to someone who hasn’t responded to your in a few days?  Inbox will notice this and automatically pop that email back up into your Inbox asking you if you’d like to follow up.  Or if Inbox notices you haven’t replied to a message, it’ll bring that message to the top of the inbox and suggesting you reply to it.

Send an email but you just realized you forgot a subject line or spelled the person’s name wrong?  You can easily undo your send action if you act within 5-7 seconds after the email has been sent.  .

Another situation where Inbox really shines at work is smart replies.  Based on the text of an email that is sent to you, Inbox will suggest smart replies when you’re composing a response to the message. 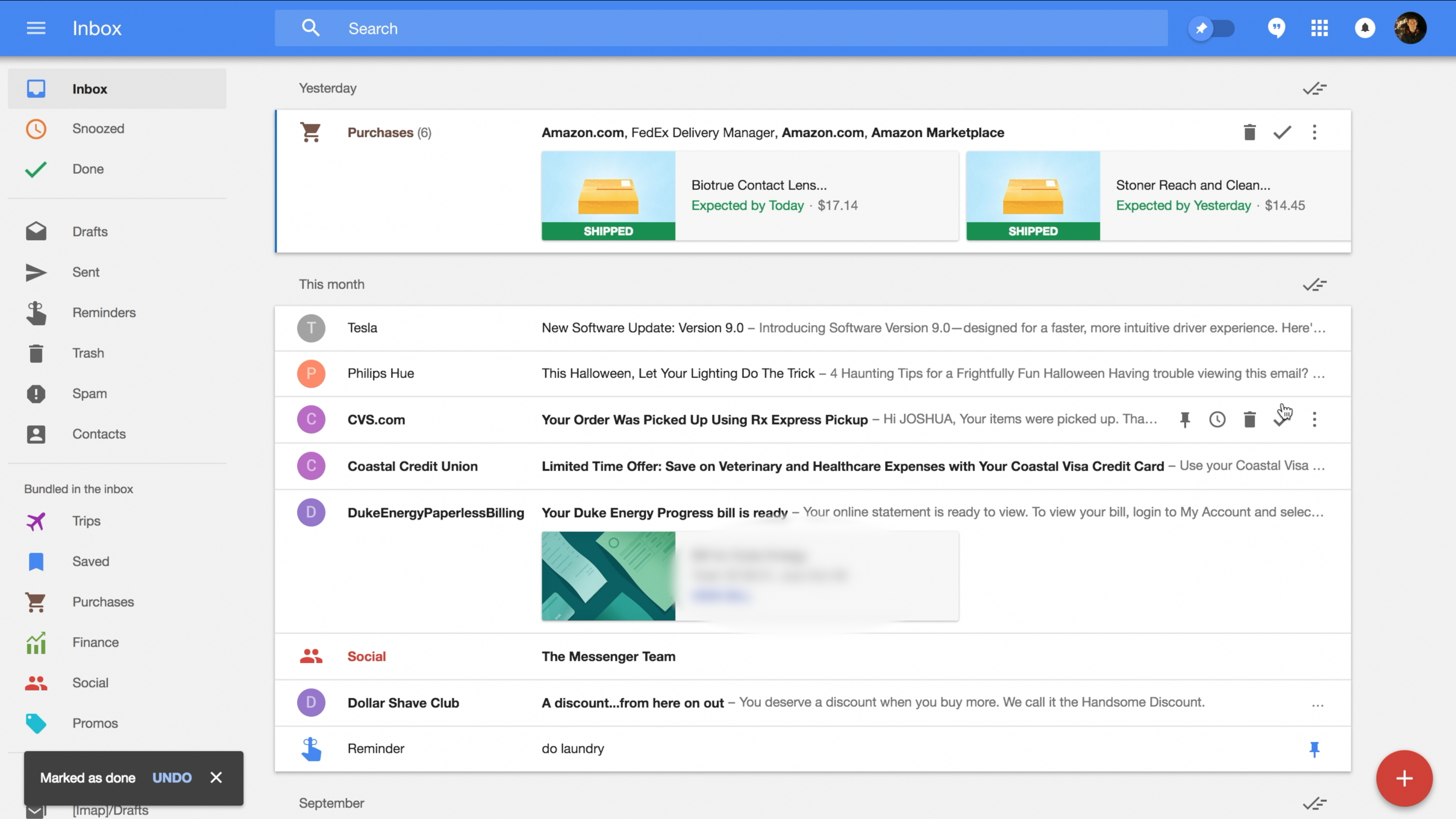 As you can see, Inbox is quite a little nifty tool for getting your work done through Gmail and thankfully, Google has recognized this and brought a lot of its features to Gmail already including snooze, smart replies, and hover actions.  However, Gmail still doesn’t have bundling, one of Inbox’s best features, and Gmail’s UI is nowhere near as simple as Inbox’s. 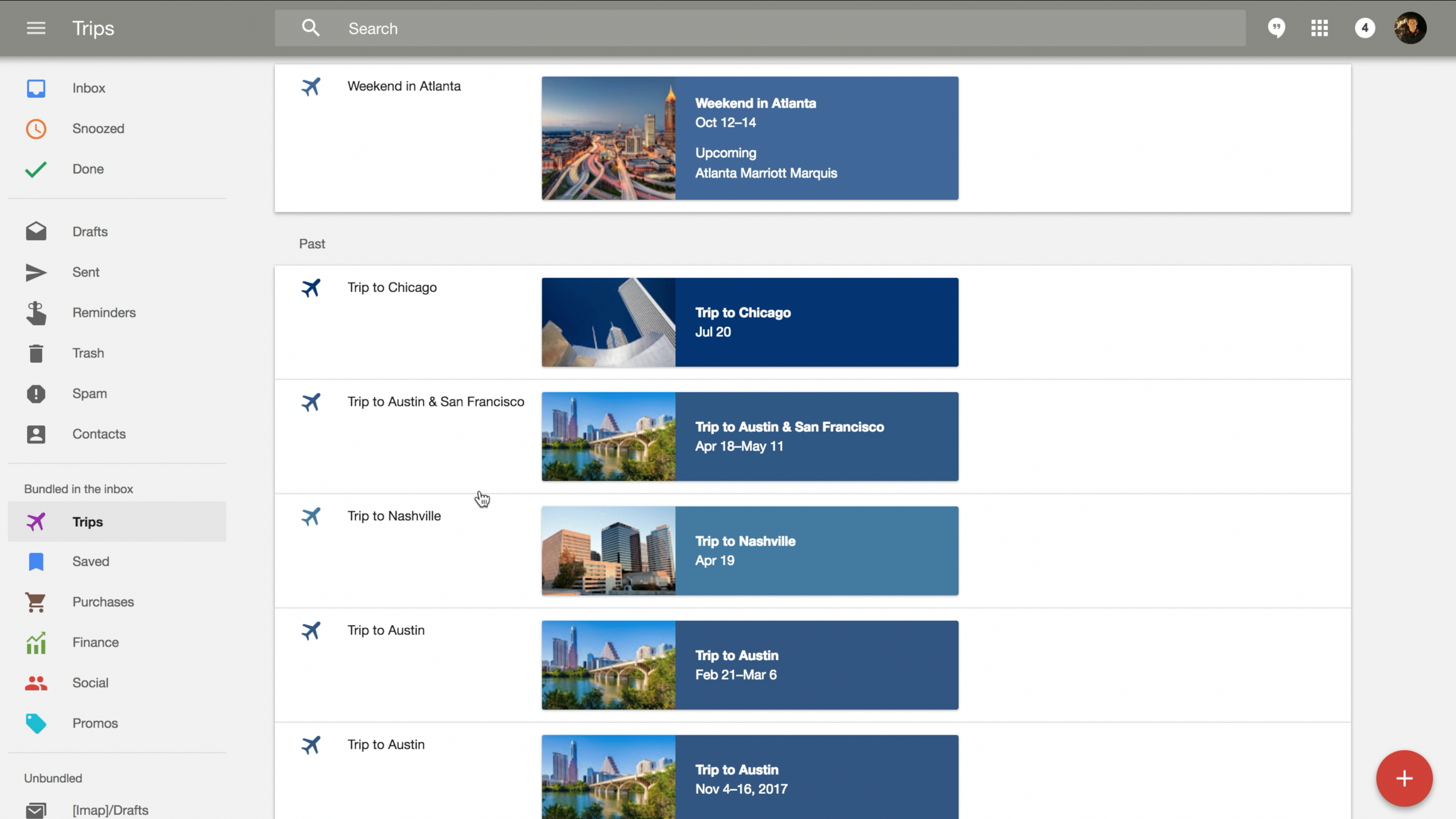 Google has announced that bundling will eventually come to Gmail, but didn’t give a timeline.  Presumably it’ll happen before Inbox is sunset in March.  It’s the most useful feature of Inbox by far and are fundamental to Inbox. They make going through email so much more bearable. 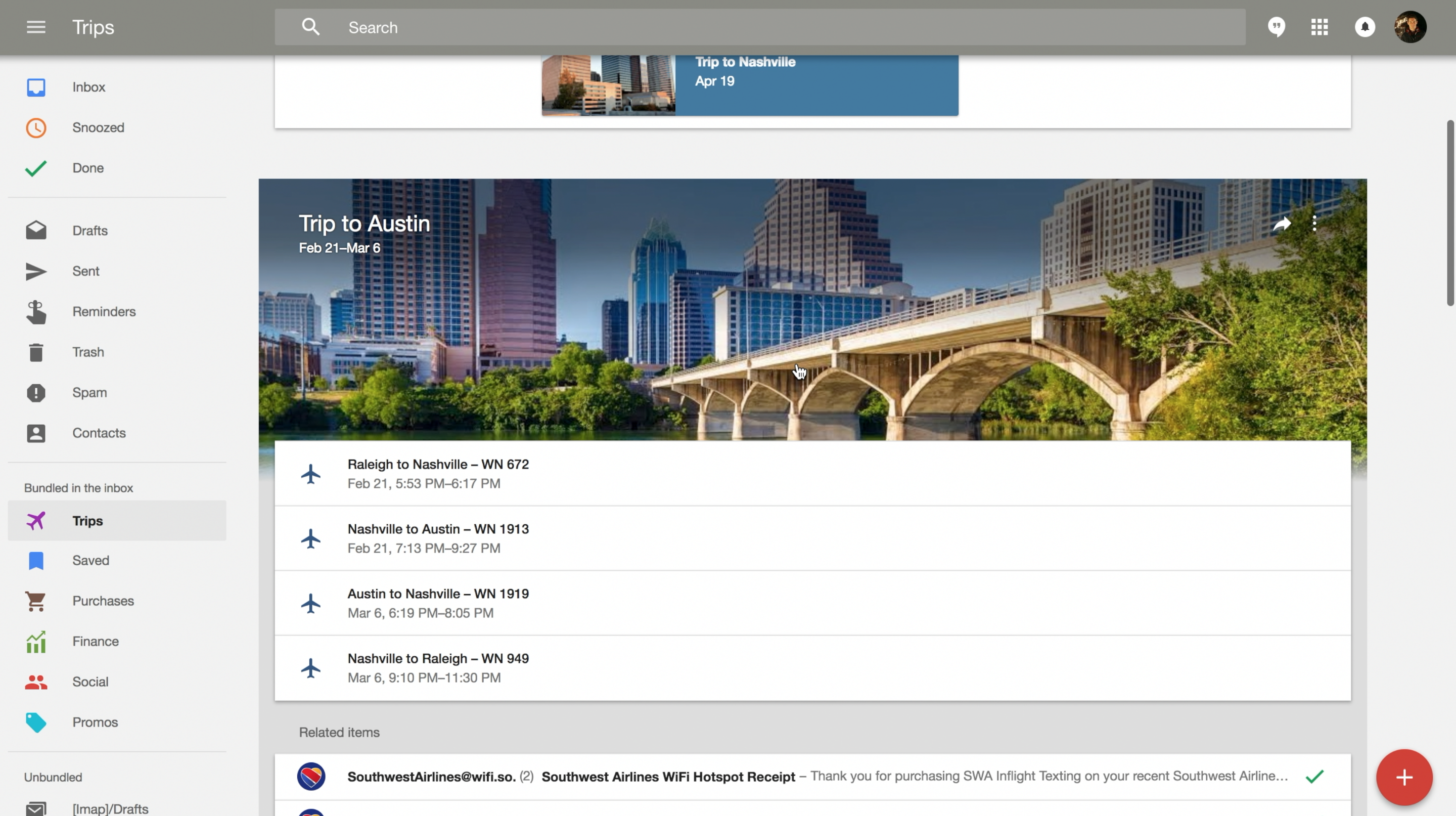 Need to see all of the emails regarding an upcoming work trip or holiday trip?  Bundles has you covered.  You can go into trips to see all the emails associated with a specific trip.  This is great when you’re actually on your trip and quickly need to access your hotel reservation or car rental.  All of those confirmation emails are there, automatically, in one place.

The same goes for purchases. You can easily search for receipts.  Just go to the search bar, type the item your searching for and then type “in:purchases”.  This way Google isn’t scrubbing all of your promotional emails from vendors when it’s looking for your purchases. 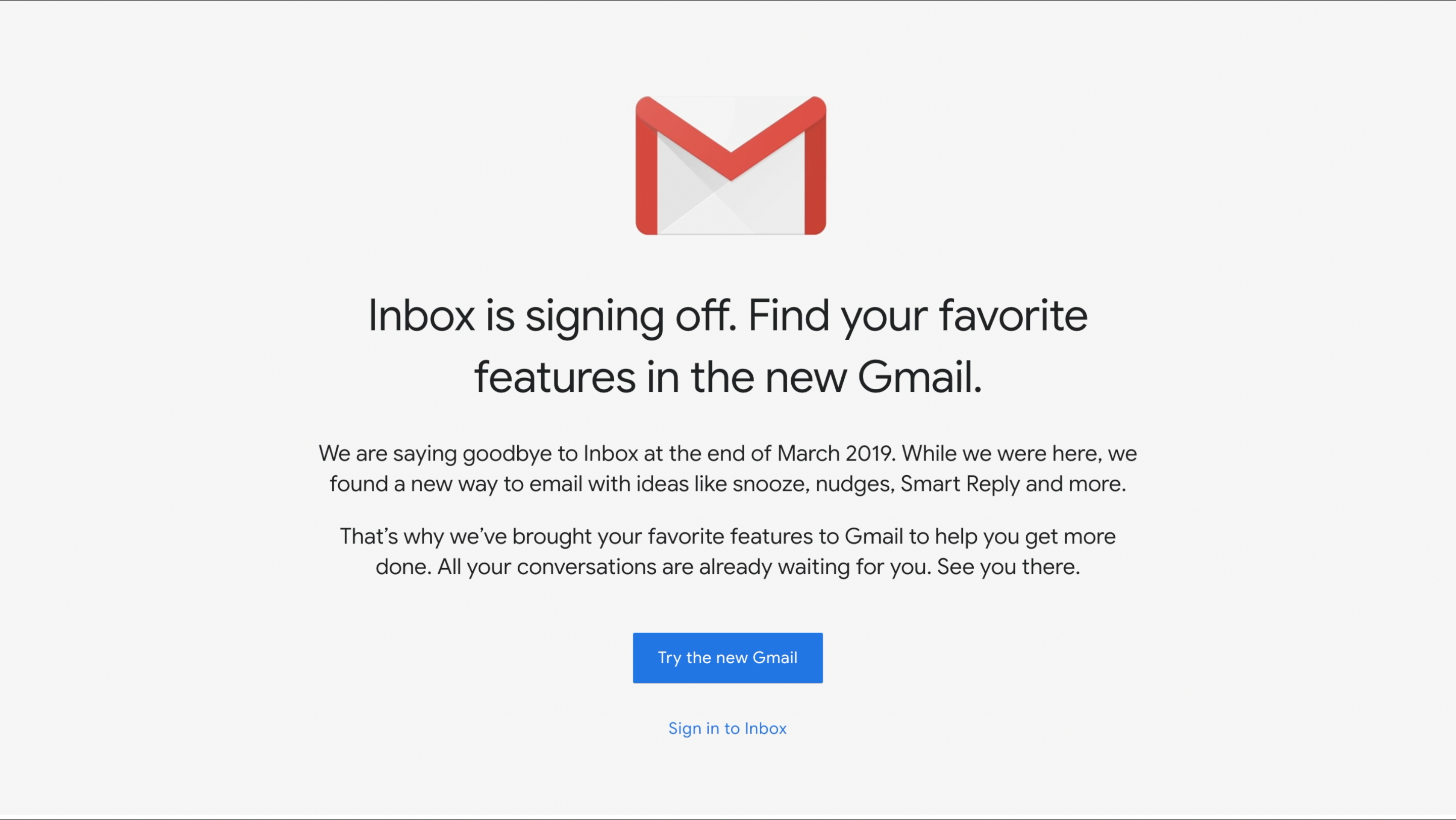 Another headstone in the graveyard

Inbox by Gmail was supposed to be the testing group for brand new, cutting edge email features for Google, like bundles.  While some may argue that Inbox has done it’s job, I think it’s premature to kill off Inbox when Gmail is not up to parity with Inbox.

I think there is value in having a playground for Google to do it’s Google-y, “I’m gonna change the world one bundle at a time” type of features.  They just killed their testing ground for email. I for one am bummed that Inbox will now join it’s other fellow applications in the ever-expanding Google graveyard.

By Josh Teder November 1st 2018 – October again proved to be a very busy month in the world of the Google Home Devices and the Google Assistant.  Google announced a bunch of new things at Read more…