August 12, 2018 – If there was one thing I was worried about when ordering an electric car, it was road trips.  Almost every time I told people I was getting a Tesla Model 3, they would often reply with a mix of excitement and curiosity.  A road trip was one of those topics that aroused more curiosity and reservation than excitement.  How exactly were you supposed to take a Tesla on a road trip?  Do you have to wait for hours for the car to charge?

Most of the reservations people have about Teslas on road trips are overblown.  It may be that some are not as familiar with Tesla’s Supercharger network, or they don’t quite realize that there are different charging speeds to charge electric cars.  For the most part, charging a Tesla on a road trip isn’t a negative experience. The only time when it would be is on a very long road trip where you’d have to stop the car 3-5 times before reaching your destination.  This would be a trip around 600-900 miles.  On those trips is where those 30 min Supercharging stops start to add up.

For shorter road trips that are 0-500 miles however, you’re only going to need to charge once or twice with the long range Model 3.  This was the case on both of the road trips I recently took.  One was from Raleigh, NC to Washington D.C. while the other was from Raleigh, NC to Ocean Isle Beach, NC.  On each trip I only needed to stop once to supercharge.  I timed the supercharging stops during a meal, which I would have stopped for anyways if I was driving an internal combustion engine (ICE) vehicle.  So, supercharing on both of my trips added no additional time to my journey. 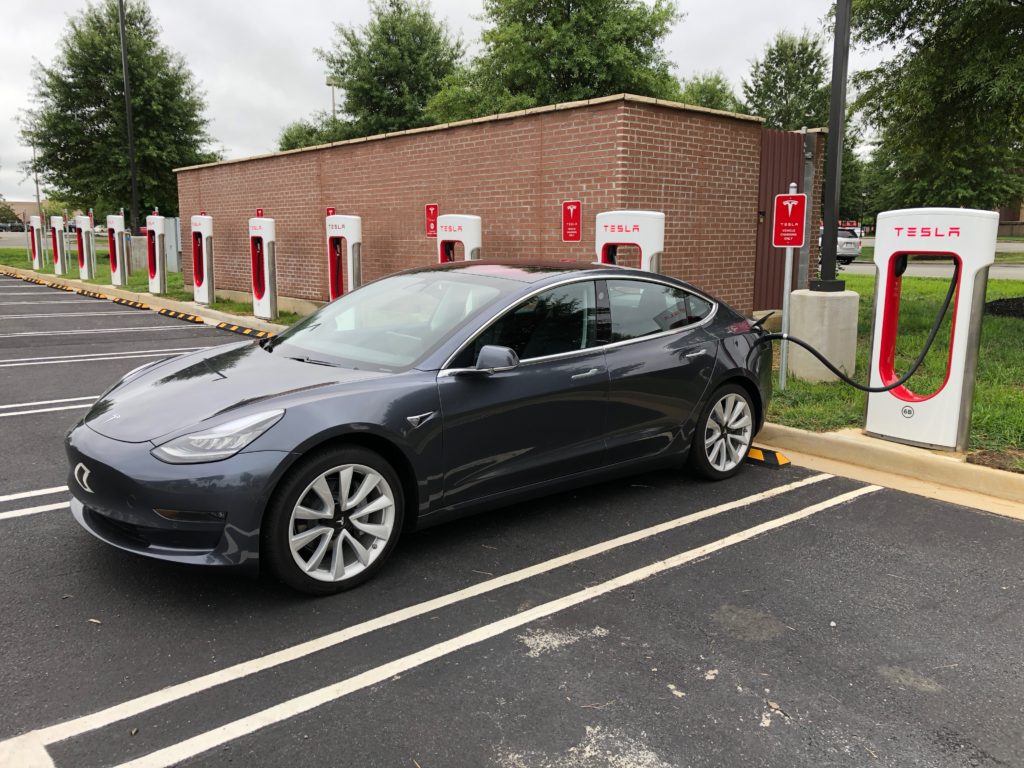 The actual process of supercharging a Tesla is simple.  First, when you put in your end destination, your Tesla will determine if you’ll need to stop to charge.  If you do, it’ll route you to the most appropriate supercharger on the way to your destination.  You can easily see where the supercharger will be on the car’s map. Or on Tesla’s supercharger map and trip planner. 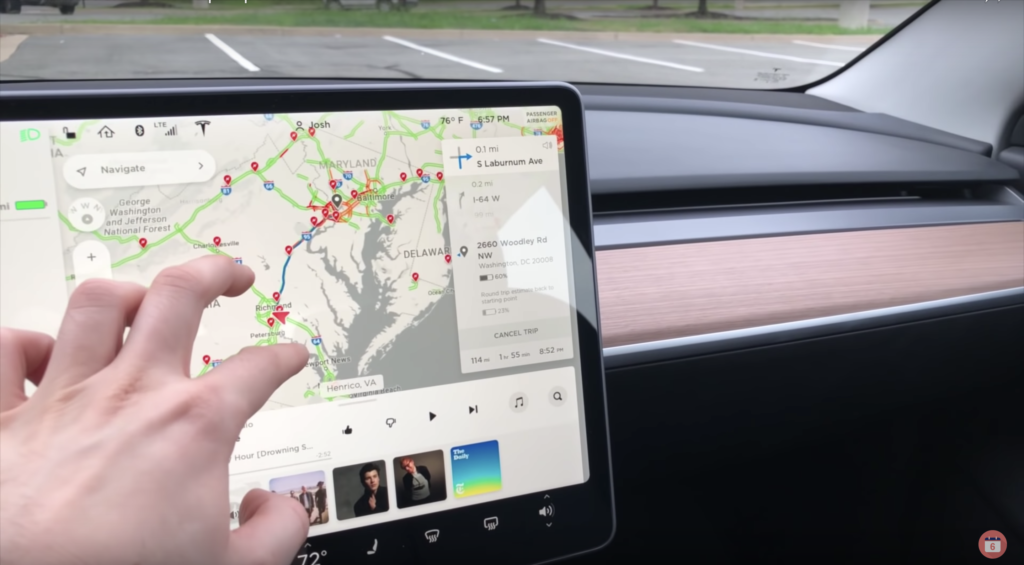 You do have the choice of which supercharger you can stop at.  For my DC road trip, I decided that I wanted to stop at a different supercharger outside of Richmond than the one the car routed me to.  I really wanted the one across from the Panera.

Once you pull into a supercharger, all you have to do is take the charger out of the stall, click the button on the charger, which will open your car’s charging port, and then plug the charger in.  Your car will then being to accept the charge from the supercharger. The charge kilowatt rate is displayed on your car’s screen.  It will also display how long it’ll take you to reach a full charge on the car.

In a lot of scenarios, you don’t actually need to charge to full, since the rate of charge slows down as your battery gets more full.  Tesla’s navigation will give you an estimate of how long you’ll need to spend at the supercharger stop.

Overall the Tesla supercharger experience on road trips is effortless.  You pull up, plug in, take a short break, and then you’re on your way again.  It’s also much cheaper than gas! 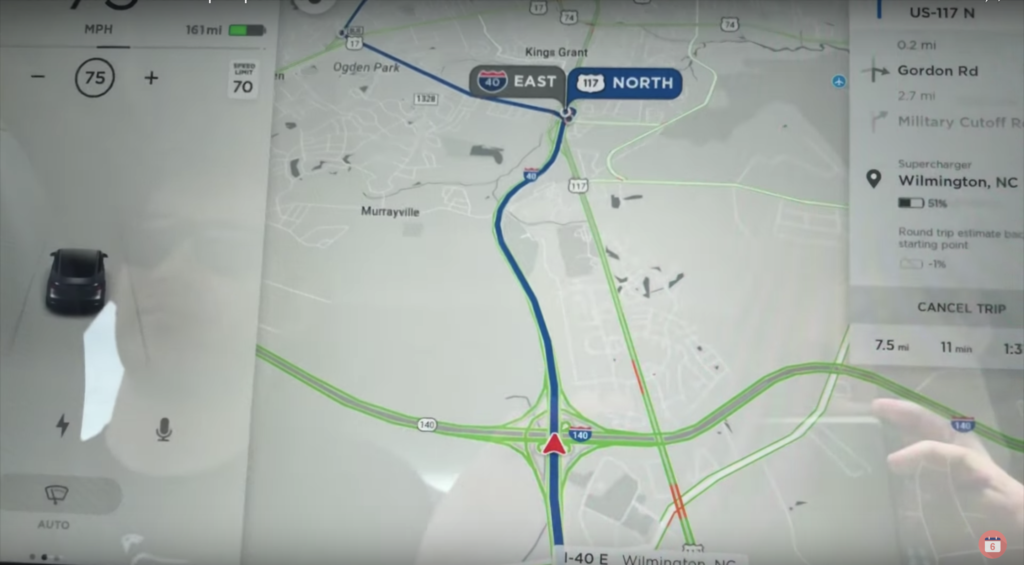 A view of how the Tesla Model 3 display shows upcoming splits on the highway.

I also really like how Tesla’s navigation shows you what lane you need to be in.  It also shows you which side of the road to stay on when a split in the road or highway occurs.  Overall, everything it’s displayed has been accurate and I haven’t run into any issues with it on my road trips.

Some other observations from the trip that made an impression on me were first, how quiet the cabin was.  It was incredibly quiet. You only hear tire noise and a little bit of wind.

In rainy conditions on the trip, I thought the car handled very well.  I never felt unsafe driving in poor conditions. Even though I don’t have Autopilot equipped on the car, I could still see what the radar was picking up which helped aid in driving through the downpour.

The last observation I had while taking my road trips was on the comfort of the Model 3’s interior.  The seats are very comfortable to long distance travel.  Neither my back, butt, or neck got sore on either trip.  The soft materials throughout the cabin and especially where you rest your arms are a really important touch.  It helps a lot with the ergonomics of long distance travel in a Tesla Model 3.

Overall, I throughly enjoyed my time driving the Tesla Model 3 on a road trip.  It is by far the best vehicle for a road trip I have ever been in.  The fantastic maps and navigation, easy supercharging experience and overall comfort of the interior and drive make this car a pleasure to drive on a road trip.  Now I realize why Tesla owners want to drive their cars anywhere.  When your car is this good, you don’t want it sitting idle.

To learn more about the Tesla Model 3, check out some of the other reviews we’ve done. If you want this car parked in your driveway, Tesla has just opened up the online configurator for NA customers.